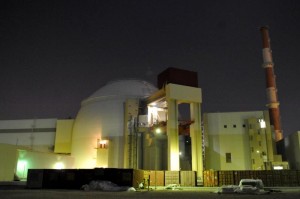 The Iranian Bushehr Nuclear Reactor has a long history, beginning in 1975, during the reign of Shah Mohammad Reza Pahlavi, when its construction was begun. During the Iran Iraq war, 1980-1988, the facility, not completed, was bombed. In 1995 Iran and Russia signed a contract for the construction of a new reactor facility at Bushehr. That contract came to completion in August 21, 2010 when Russia delivered to Iran 80 tons of Uranium for the reactor and the transfer of the Uranium into the reactor facility was begun.

The problem is not with Iran’s nuclear reactor. The problem with Iran is with its motivation, its vitrolic talk, its belligerent actions, its sponsorship of terrorism, and its idea that the Iran should lead the Islamic world into a messianic End of Times. In short, Iran is neither a peace loving or peace promoting country. Since the overthrow of the Shah in 1979, the revolutionary regime has pursued aggressive
bullying and destabilizing policies in the Middle East in its attempt to gain a domineering and leadership role.