Home » Middle East » The War between the Sunnis and Shiites

The War between the Sunnis and Shiites

The major split in Islam is that between the majority Sunnis and the minority Shiites.  The split goes back to events in the 7th century:

After Mohammed’s death in 632, leadership of the Islamic community passed to Abu Bakr as-Siddiq, one of Mohammed’s closest companions.  Some in the community felt that this succession was not legitimate, and that the title of caliph really belonged to Ali ibn Abi Talib.  Ali’s claim was supported by the fact that he was Mohammed’s cousin, his adopted son, his first convert (at the age of nine), and husband of his daughter Fatima.  Both sides believe that Mohammed specifically designated their man:  Supporters of Abu became the Sunnis, those of ibn Ali the Shiites.

The  Caliphate passed from Abu Bakr to Umar, and from Umar to Ulthman.  Ulthman at last passed the torch to Ali.  When Ali was murdered in 661, the Caliphate passed to Muawiya, who would found the famous Umayyid Caliphate.  Ali was buried in Najaf in what is now Iraq, and the site remains a major Shiite holy site.

Sunni refers to the sunnas, or oral traditions and interpretations of the Koran — a body of work similar to the Jewish Talmud.  Sunnis believe that the position of Caliph should be a position to which one is elected by the religious leaders of the Islamic community, and not dependent on direct lineage from Mohammed. 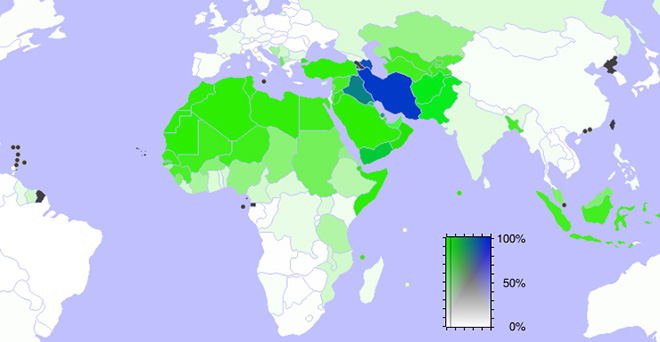 Shiite comes from the word shia, which means “the party (of Ali).”  They are mostly found in Iran and Iraq, and among the Palestinians.  They consider certain direct descendants of Ali – the Imams – infallible and the true inheritors of Mohammed.  Ali was the first Imam, his son Hassan the second, his second son Hussein the third.   Ali’s sons were killed in the conflict with Caliph Muawiya.  However, their succession ended with the 12th Imam, who went into hiding in 940.  Most Shiites believe that the 12th Imam will reemerge someday as the Mahdi or Messiah, and reassert his leadership of the Islamic world.  In the meantime, ayatollahs are elected to serve as caretakers of the faith.

Most Sunnis and Shiites are liberal, although not by western standards.  In peaceful and prosperous times, there is little conflict between them.  But both have more extreme factions as well.  Some Shiites, for example, have a tradition of valuing martyrdom that came out of their early experiences of conflict with the Sunnis.  The most famous Sunni extremist faction is the Wahhabi sect, of which Osama bin Laden is possibly a member.  It is characterized by radical fundamentalism:  The Koran is not to be interpreted but rather taken literally.  There are to be no prayers or other appeals to prophets, saints, or any entity other than God.  There are to be no images of or monuments to any supposed Islamic leaders, not even elaborate tombs for famous Moslems.  And the Koran is to be the soul source of secular as well as religious law.

Another famous group is the Sufi movement, which can be Sunni or Shiite.  Sufis are mystics who believe that God’s love shines through everything, even ugliness and evil, and that by attaining a certain state of mind, one can directly experience this.  In this sense, they resemble Zen Buddhism.  Sufism is also noted for its use of stories that have layered meanings, much like the parables of Jesus.  One subgroup of the Sufis is the “whirling dervishes,” whose mystical practice includes religious dance.