Uzi Landau fires at claims that the operation in Gaza is nearly done, warns that Hamas may have chemical weapons next time around. 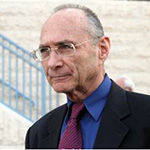 Tourism Minister Uzi Landau (Yisrael Beytenu) sharply criticized claims that the target of Operation Protective Edge has been achieved on Sunday, stating that the real threat is missile fire – and that destroying tunnels, in his words, only goes so far.

“The tunnels are a secondary objective, the main purpose was to take care of the missile threat,” Landau dismissed, on a Channel 10 morning show with Orly Vilnai and Guy Meroz.

Landau explained that if the operation ends now, Hamas’s ability to fire rockets will not be affected substantially – and, in addition, the tunnels that will be destroyed will be restored.

“As of this moment, the goal of the operation [. . .] has not been achieved,” Landau fired. “The goal should be reformulated to include long-term peace, which will not happen if they hit us soon with rockets again.”

Landau added that, the next time around, Hamas will likely have “heavier missiles and larger ranges [of attack]” and possibly “chemical weapons” – if Israel does not finish the job “properly.”

He said the goal should be removing the missile threat and the demilitarization of the Gaza Strip – and that Israel should act against Hamas in the same way the US acted against Al Qaeda, in his words.

“The current method of static battles, when you stand in front of them for days and lose the local advantage…this method can not continue,” he said, referring to the ground operation in Gaza, which is now in its twenty-seventh day.