Home » Middle East » The War of Attrition in Gaza

The War of Attrition in Gaza 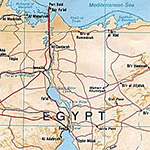 Following the 1967 Six-Day War, there were no serious diplomatic efforts to resolve the issues at the heart of the Arab-Israeli conflict. In September 1967 Arab states formulated the “Three Nos” policy, barring peace, recognition or negotiations with Israel. Egyptian President Gamal Abdel Nasser believed only military initiative would compel Israel or the international community to force a full Israeli withdrawal from Sinai, and hostilities soon resumed along the Suez Canal.

These initially took the form of limited artillery duels and small scale incursions into Sinai, but by 1969 the Egyptian Army was prepared for larger scaled operations. On March 8, 1969, Nasser proclaimed the official launch of the War of Attrition, characterized by large scale shelling along the Canal, extensive aerial warfare and commando raids. Hostilities continued until August 1970 and ended with a ceasefire, the frontiers remaining the same as when the war began, with no real commitment to serious peace negotiations.