Home » Israel » The Evacuation of Migron in Israel

The Evacuation of Migron in Israel 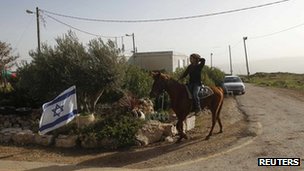 Israel’s top court has rejected a deal between the government and Jewish settlers to delay evacuation of an illegal West Bank outpost until 2015.

The Supreme Court had earlier ruled that the post must be demolished by the end of the month, because it was built on privately-owned Palestinian land.

But the government appealed for the demolition to be postponed for three-and-a-half years.

The delay was to allow settlers to rebuild their homes at another site.

The court has extended the evacuation deadline until August.

Migron, north of Jerusalem and home to 280 settlers, is one of the largest unauthorised West Bank settlements.

Just now amazing YouTube about the verdict of the high court to day , that the settlment Migron have to be evacuated in the 5772 13 of Av which appears in the table.