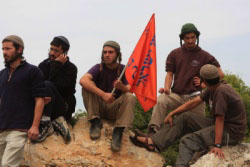 Rabbi of Beit El and prominent national-religious leader, Rabbi Zalman Baruch Melamed, issued a public letter on Wednesday calling for a “decisive struggle” over the pending evacuation of the Ulpana outpost on the outskirts to Beit El.

“We call on the entire public and on MKs of the Land of Israel Faithful [lobby] to join in this decisive struggle with dedication and sacrifice,” the Rabbi wrote in a short missive sent to the press.

Officials from the Prime Minister’s Office have made efforts of late to reach out to the influential Melamed in order to ensure a peaceful evacuation of the outpost.

In his letter, Melamed also praised MK Yaakov Katz (Ketzeleh) for leading the campaign against the “decree of destruction of the Ulpana homes,” blessing him that his struggle should be successful.

Melamed also cited Rabbi Avrhama Yitzhak Hacohen Kook, the spiritual founder of the national-religious movement, quoting him as saying “It is upon every Jew faithful to Israel to stand with complete and utter self-sacrifice against the abandonment of the smallest part of the land of our life and the deliverance of it into the hands of non-Jews.”

Speaking to his students on Saturday night, the rabbi said that the campaign would comprise of two paths, one of dialogue to achieve their aims and one of protest, although he said specifically that he would not enter into details about “the strength or severity,” of this protest campaign.

He also said that it was not yet the time for the yeshiva students to erect tents at the Ulpana outpost, but instead to make greater efforts in their Torah studies and to improve their behavior towards their fellow man, “to be better people and to increase their merits though acts of kindness and prayer.”

Civil War in Israel in Bible Codes by Rabbi Glazerson