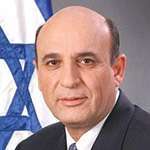 Netanyahu is once again not leading, but being led. He is not initiating but being dragged along. When it comes to the national service law, only the Haredim seem happy.
Netanyahu’s gigantic coalition of 94 Knesset members, which won him the nickname “King Bibi,” flunked its first test on Thursday. It was Avigdor Lieberman, head of Yisrael Beiteinu, who pulled the first brick out of the coalition wall.