Germany invaded Poland on 31 August 1939. German forces reached the southern and western parts of the city on 8 and 9 September 1939. They surrounded the city and within three weeks they were occupying the city. Jews were subjected to attacks and discrimination. They were driven from food lines, seized for forced labour. Religious Jews wearing their traditional garbs were assaulted. Jewish teachers, craftsman, professionals, members of welfare and cultural institutions lost their positions, without any compensation, with little or no prospect of obtaining similar positions.

Then followed the decrees. First decrees about Jews having to wear armbands. Then decrees about money. Jews were ordered to deposit their money in a blocked bank account. The banks could release no more than 250 zloties per week to the holder of the account. These orders made it impossible for Jews to carry on economic activity in the open, and particularly outside of Jewish circles. In addition to blocking Jewish accounts and putting a stop to economic activity, the Germans also embarked upon the confiscation of Jewish enterprises, excluding small stores in the Jewish area. Jewish managers and staff were often removed, only being retained, if it suited the new owners.

On 12 October 1940, The Day of Atonement, the Jews were informed of the decree establishing a ghetto. The Jewish population, about 30% of the population of Warsaw, was forced packed into 2.4% of the city’s area. A ten foot wall was built around the Ghetto to keep the Jews within. The food rations, allocated to the Warsaw Jews, consisted of 181 calories per day. The Jewish population began a slow starvation. Living conditions became unsanitary. By 1942, 5000 people a month were dying from starvation and disease.

On July 22, 1942 there was a new proclamation. With a few exceptions, all Jews were to be resettled to the east, regardless of age and sex. Resettlement to the east meant a one-way trip to the death camp Treblinka. But the Warsaw Jews did not know that. Jews began resettlement on July 23, 1942. This was the ninth of Av. 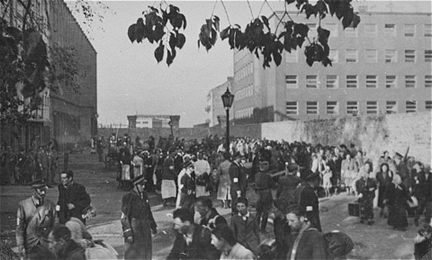 Umshlagplatz: The Warsaw Ghetto inhabitants were assembled, marched to a railway siding at the Umschlagplatz gathering point, and put on trains to Treblinka. In the beginning the Jews did not know they were going to a death camp.