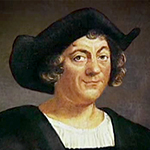 Christopher Columbus (Spanish:Cristobal Colón; before 31 October 1451 – 20 May 1506) was an explorer, colonizer, and navigator, born in the Republic of Genoa, in what is today northwestern Italy. Under the auspices of the Catholic Monarchs of Spain, he completed four voyages across the Atlantic Ocean that led to general European awareness of the American continents. Those voyages, and his efforts to establish permanent settlements in the island of Hispaniola, initiated the process of Spanish colonization, which foreshadowed the general European colonization of what became known as the “New World”.

Was Columbus secretly a Jew?

CNN – Today marks the 508th anniversary of the death of Christopher Columbus.

Everybody knows the story of Columbus, right? He was an Italian explorer from Genoa who set sail in 1492 to enrich the Spanish monarchs with gold and spices from the orient. Not quite.

For too long, scholars have ignored Columbus’ grand passion: the quest to liberate Jerusalem from the Muslims.

During Columbus’ lifetime, Jews became the target of fanatical religious persecution. On March 31, 1492, King Ferdinand and Queen Isabella proclaimed that all Jews were to be expelled from Spain. The edict especially targeted the 800,000 Jews who had never converted, and gave them four months to pack up and get out.

The Jews who were forced to renounce Judaism and embrace Catholicism were known as “Conversos,” or converts. There were also those who feigned conversion, practicing Catholicism outwardly while covertly practicing Judaism, the so-called “Marranos”.

Tens of thousands of Marranos were tortured by the Spanish Inquisition. They were pressured to offer names of friends and family members, who were ultimately paraded in front of crowds, tied to stakes and burned alive. Their land and personal possessions were then divvied up by the church and crown.

‘Marrano’ is a portuguese and spanish linguist term, mixed with hebrew phonetic notions, to describe the jews that were forced converted by the Inquisition.

Columbus the Marrano Jew in Bible Codes by Rabbi Glazerson