Germany invaded Poland on 31 August 1939. Using blitzkrieg tactics, Poland fell within three weeks. Lodz, located in central Poland, held the second largest Jewish community in Europe, second only to Warsaw. When the Nazis attacked, Poles and Jews worked frantically to dig ditches to defend their city. Only seven days after the attack on Poland began, Lodz was occupied. Within four days of Lodz’s occupation, Jews became targets for beatings, robberies, seizure of property, and forced labor. 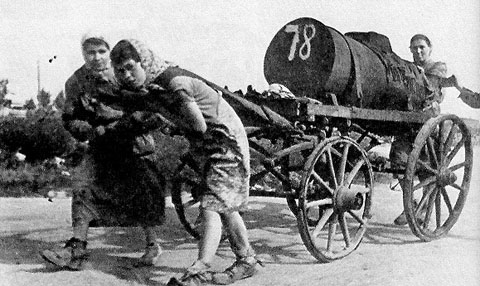 Women being forced to transport excrement, from that part of the Lodz Ghetto having no sewer.

On February 8, 1940, the 22nd of Shevat, the order to establish the Lodz ghetto was announced. Jews from throughout the city were ordered to move into the sectioned off area, only bringing what they could hurriedly pack within just a few minutes. The Jews were packed tightly within the confines of the ghetto with an average of 3.5 people per room. In April a fence went up surrounding the ghetto residents. On April 30, the 22nd of Nisan, the ghetto was ordered closed and on May 1, 1940, merely eight months after the German invasion, the Lodz ghetto was officially sealed.

In early December 1941, the Chelmno death camp had been made operational. The Nazis now began the execution of their final solution in Lodz. On December 10, 1941 there was a new proclamation. The Nazis wanted 20,000 Jews deported out of the ghetto. Rumkowski, the Jewish leader of the Ghetto, talked them down to 10,000. Lists were put together by ghetto officials. 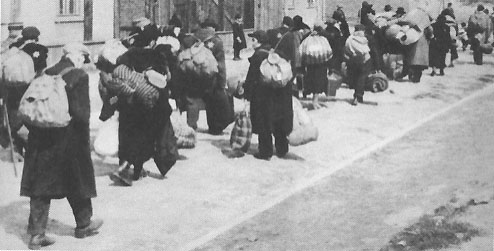 Jews on their way to the trains, being deported out of Lodz to the Chelmno deathcamp.