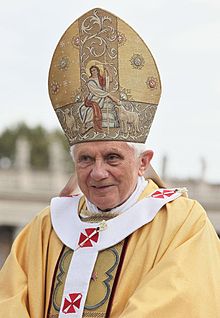 Pope Benedict the 16th says he lacks the strength at 85 to fulfill his duties and will step down on February 28th, becoming the first pope in nearly 600 years to resign from the post.

Vatican spokesman Father Federico Lombardi said the pope’s announcement had come as a surprise during a meeting with cardinals at the Vatican early Monday. Lombardi ruled out any specific illness, just advancing age.

The pope told the cardinals that he had come to recognize his “incapacity to adequately fulfill the ministry entrusted to me.”

The move allows Vatican officials to hold a conclave to elect a new pope before Easter, which this year is on March 31st.

There are several papal contenders, but no obvious front-runner — the same situation when Benedict was elected pontiff in 2005 after the death of Pope John Paul II.

Pope Benedict said in his statement that he would serve the Catholic church for the remainder of his days through a life dedicated to prayer.

The child sex abuse scandals that tarnished the Church hounded much of his papacy. And he faced scandal from a source much closer to home in 2012, when the pontiff’s butler was found to be the source of leaked documents alleging corruption in the Vatican’s business dealings.

‘Benedictus the 16′ in Bible Codes by Rabbi Glazerson

Will Obama be Elected Second Time?
Ruani and Obama
Secret of Israel and the Torah
Big Bang