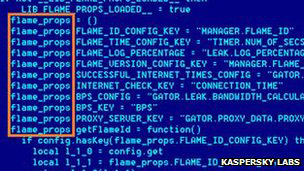 A complex targeted cyber-attack that collected private data from countries such as Israel and Iran has been uncovered, researchers have said.

Russian security firm Kaspersky Labs told the BBC they believed the malware, known as Flame, had been operating since August 2010.

The company said it believed the attack was state-sponsored, but could not be sure of its exact origins.

They described Flame as “one of the most complex threats ever discovered”.

Research into the attack was carried out in conjunction with the UN’s International Telecommunication Union.

They had been investigating another malware threat, known as Wiper, which was reportedly deleting data on machines in western Asia.

The Virus Flame in Bible Codes by Rabbi Glazerson