Mashiach and Russian Missiles to Syria 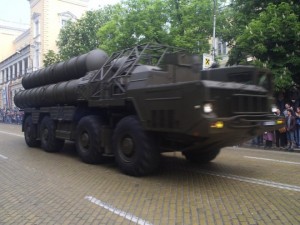 S300 on parade in Moscow

Russia has defended its decision to supply Syria with sophisticated S-300 anti-aircraft missiles, saying the system will help deter foreign intervention in the Arab country.

Russian Deputy Foreign Minister Sergei Ryabkov said on Tuesday that the air defense system was a “stabilizing factor” that could dissuade “some hotheads” from entering the unrest in Syria.

“We consider these supplies a stabilizing factor and believe such steps will deter some hotheads from considering scenarios that would turn the conflict international with the involvement of outside forces,” Ryabkov said.

He added that Moscow would go ahead with the decision since the contract for the delivery of the system had been signed several years ago.

Russia’s envoy to NATO Aleksandr Grushko has also defended Moscow’s decision, saying his country was acting “fully within the framework of international law.”

“We are not doing anything that could change the situation in Syria,” Grushko said on Tuesday, adding that “The arms that we supply are defensive weapons.”

US, Israel and several Western countries have been pressing Russia not to go through with a promised delivery of S-300 missiles to the Syrian government.

Meanwhile, Israel’s Minister of Military Affairs Moshe Yaalon has said the S-300 missiles destined for Syria have not left Russia yet, adding that Israel will know how to react once the missiles get on the way to Syria.