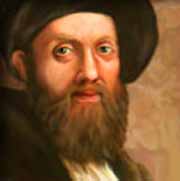 Isaac Luria (1534 – August 5, 1572) was a Jewish scholar and mystic in Safed who was secretly believed by some to be the messiah. In many ways he is the founder of Judaism’s Kabbalah in its modern form; modern Jewish mysticism is often referred to as Lurianic Kabbalah.

In Hebrew he is called Yitzhak Lurya, Yitzhak Ben Shlomo Ashkenazi, and Yitzhak Ashkenazi. He is also known as Ha-Ari “The Lion” from the acronym for Ashkenazi Rabbi Itzhak, thus Arizal with “ZaL” being the acronym for Zikhrono Livrakha “of blessed memory” or literally “let the memory of him be for a blessing”, a common Jewish honorific for the deceased, and known as Ari Ha-Kadosh “The holy lion”.

The Kabbalist Isaac Luria in Bible Codes by Rabbi Glazerson