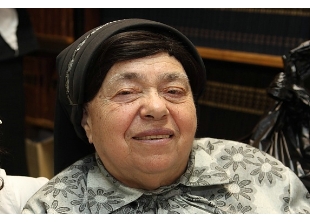 Rebbetzin Bat-Sheva Kanievsky died in the early afternoon on Shabbat, in her home in Bnei Berak. She suffered a heart attack.

Magen David Adom emergency crews arrived and attempted to resuscitate her, but to no avail.

Rebbetzin Bat-Sheva Kanievsky was the wife of Rav Haim Kanievsky and the daughter of Rav Yosef Shalom Elyashiv, known as “the greatest posek,” or halakhic decisor.

The rebbetzin’s funeral will depart the Lederman Synagogue in Bnei Berak Saturday night at 10:00 p.m.

Source: www.israelnationalnews.com
Subject: סיפור ממקור ראשון הרבנית קניבסקי ז”ל הגיעה בחלום לבת ואמרה לה שהיא חוזרת בקרוב
A story just now came out from the first source Rabetzen Kanyevsky came to her daughter (who took her place to accept people) in a dream. The daughter asked her what to do with clothes that she left. Rabbetzen Kanyevsky answered to her: “Do not worry soon I will come back.” (The Rabbi said that the story should be distributed all over the world)

Radio in which the story is told in Hebrew. הרבנית_קניבסקי_ז”ל_באה_בחלום

In the Table below you have only once in the whole Torah, תחיית המתים -The revival of the dead, with the minimal appearance in the Torah התשץ 5790 , which the date given by the Ramban in the book “song of songs”.