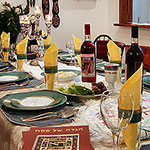 Nisan (or Nissan) (Hebrew: נִיסָן, Standard Nisan Tiberian Nîsān) is the first month of the ecclesiastical year and the seventh month (eighth, in leap year) of the civil year, on the Hebrew calendar.

The name of the month is Babylonian; in the Torah it is called the month of the Aviv, referring to the month in which barley was ripe. It is a spring month of 30 days. Nisan usually falls in March–April on the Gregorian calendar.

In the Book of Esther in the Tanakh it is referred to as Nisan.

Mashiach in Nisan 5773 in Bible Codes by Rabbi Glazerson