Home » Israel » The Marcing of the Arabs to Jerusalem

The Marcing of the Arabs to Jerusalem 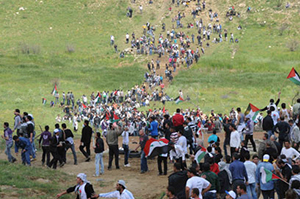 Last week, a panel devoted to the question of Jerusalem’s importance to Muslims highlighted a few politically incorrect truths: from the days of Islam’s founder Muhammad, Muslims have been “raising or lowering Jerusalem’s importance in accordance with [their] political concerns.” As a matter of fact, the city that has been holy to Jews for millennia is not mentioned even once in the Koran.

But while Muhammad decided to downgrade Jerusalem’s importance for the followers of his newly established faith when his hopes to be accepted as a prophet by the Jews of what is now Saudi Arabia proved futile, Ayatollah Khomeini concluded that the chances to export his “Islamic revolution” beyond Iran would greatly benefit from efforts to rally all Muslims – whether Shiites or Sunnis – around the city that the re-established Jewish state had re-united in 1967. Khomeini lost no time, and in August 1979, shortly after taking power, he called on “Muslims all over the globe to consecrate the last Friday of the holy month of Ramadan as Al-Quds Day and to proclaim the international solidarity of Muslims in support of the legitimate rights of the Muslim people of Palestine.” Khomeini also expressed his hopes “for the victory of the Muslims over the infidels.”

Gunter Grass, the SS Men
Israel the Poorest Country and Mashiach
Land of Israel to Israel
Liquidation the Hamas from 5775

One Response to The Marcing of the Arabs to Jerusalem