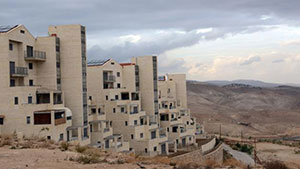 New housing units in the Israeli settlement of Ma’ale Adumim in the West Bank, east of Jerusalem, overlook the E-1 area, where Israel says it will build thousands of housing units, December 5, 2012.

Israeli Prime Minister Benjamin Netanyahu says he will build 3,400 houses in the West Bank, including the E-1 corridor, between Jerusalem and Ma’ale Adumim.

The move has sparked unprecedented diplomatic tensions between Israel and European States. Israel says the move is in response to the United Nations decision to upgrade the Palestinians’ status to a non-member state.