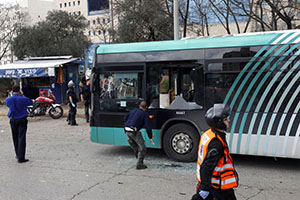 A bomb exploded at a crowded bus stop Wednesday 23rd March 2011 in central Jerusalem, killing one woman and wounding 38..

The blast could be heard throughout Jerusalem and blew out the windows of two crowded buses.

No one claimed responsibility for the bombing, which coincided with an upsurge of violence on the Gaza border that has led to fears of a new war between Israel and the Islamist group Hamas, which governs the Gaza Strip. Israeli police blamed Palestinian militants, calling the blast a “terrorist” attack.