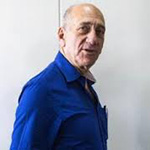 The Tel Aviv District Court sentenced former prime minister Ehud Olmert,Tuesday, to six years in prison, with two years suspended, for taking half a million shekels ($145,000) in the Holyland corruption case which involved the approval of a Jerusalem real-estate development that appeared headed for rejection when he was mayor of the capital. That was the requested by the prosecution. Judge David Rosen said the crime carried moral turpitude, which will bar Olmert from returning to public service.

Olmert expected the worst and released a statement before the sentencing, in which he said: “This is a sad day. A day in which an innocent man will be sentenced.” He will appeal the sentence to the Supreme Court.