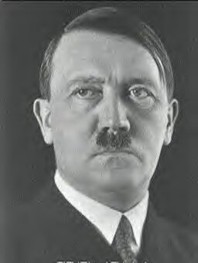 Adolf Hitler was the Fuehrer of Germany from 1934 until 1945 when he commited suicide. As Fuehrer, (dictator) he led Germany on an military expansionist policy to create a Europe dominated and populated by the Aryan race. In 1938 he pressured Austria to unify with Germany. Next was Czechoslovakia. In 1939, Germany invaded Poland and this brought military conflict to Europe and was the beginning of World War II.

He legitimized the Nazi concept of German and Aryan racial superiority and implemented governmental policies accordingly. The Nazi concept of Aryan racial superiority required the elimination of those not Aryan, those who were sick, disabled, physically handicapped or mentally retarded, those born with genetic defects, those who were homosexual, and those deemed to be racially inferior.

For this purpose he built concentration camps for the systematic institutionalized mass killing of people. Throughout his term of dictatorship, political and religious opponents were arrested and then murdered in the concentration camps. Those who became Nazi victims because of what they did or believed included Freemasons, Jehovah’s Witnesses, dissenting clergy, Catholic Poles, Communists and Socialists. The Jews and gypsies were the first ones to undergo Nazi genecide because of who they were.

In total, Hitler is responsible for killing about 6,000,000 Jews, 250,000 Gypsies, 200,000 Freemasons, and around 4,550,000 others: Poles, Ukrainians, Russians, and Byelorussionas,. Many of these were among the best and brightest men and women. These numbers do not count those soldiers and civilians killed by military action in World War II.