The Terror Attack on Asher Palmer 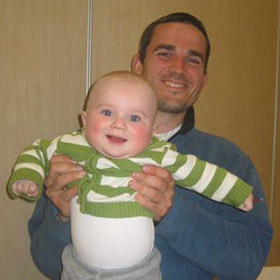 Israeli Father, Baby Killed After Palestinians Threw Rocks at Their Car, Causing it to Overturn

Israeli police said Sunday that 25-year-old Asher Palmer and his infant son Yonatan were killed in a terrorist attack after Palestinians threw rocks at their car, causing it to overturn on a highway.

It happened Friday near the Israeli settlement Kiryat Arba. Authorities originally said the wreck was due to driver error, not stone throwing, prompting accusations of a police cover up so as not to “fan the flames” of a potential Palestinian protest.

Police re-labeled it a terror attack after further investigation and an autopsy on Asher Palmer’s body revealed injuries consistent with a rock hurling, including fractures to his skull.