The Terror Attack in Bulgaria 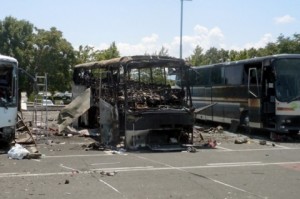 Israeli tourists arrived at the Sarafovo, Burgas airport in Bulgaria at 4:45PM on a chartered flight 392 of Air Bulgaria from Ben-Gurion Airport. There were 154 of them. By 5:25PM, they had exited the plane, gone through passport control, and walked through the arrivals hall to retrieve their luggage. Exiting the arrival hall they were met by resort representatives who directed them to one of the four special buses in the airport car park that was to transport them to Bulgaria’s largest Black sea resort: Sunny Beach.

Unknown to anyone, and wearing checked Bermuda shorts, a blue t-shirt and carrying a small backsack, the suicide bomber blended in seamlessly with the relaxed crowds travelling to Bulgaria’s sandy Black Sea coast. He had been in Bulgaria between 4 and 6 days already and carried a fake Michigan driver’s license. He was in his mid-20s with long dark curly hair under dark blue cap. He roamed for an hour under the gaze of surveillance cameras through airport buildings and around the car park. As the Israelis made their way to their assigned buses, he settled on a white coloured bus. He joined the Israeli tour group as they put their luggage in the luggage compartment and boarded the bus with them. Just as he boarded the bus, he triggered the 3 Kg TNT bomb that was in his backsack.

Some bus passengers were able to jump out of the bus windows to escape. Others were thrown into the air. Body parts were strewn across the ground, mangled metal hung from the double-decker bus’s ripped roof. Its windows were blown out and surrounded by scorch marks. Black smoke billowed over the airport. Everyone was shouting and crying. The scene was one of horrific carnage and chaos.

Six Israeli’s, the Bulgarian bus driver, and the suicide (homocide) bomber were killed. 33 Israeli’s were injured.

Bulgarian investigators said that they had managed to obtain fingerprints and DNA samples of the bomber and were checking databases in an attempt to identify him. Bulgarian Prime Minister Boiko Borisov told parliament he hoped that would be done within a three or four day period.

The Bulgarian government agreed to fly 100 of the uninjured tourists home after they opted to end their vacations.