The fire in Tuva Zangaria Mosque 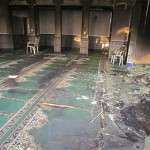 The mosque is in the village of Tuba-Zangaria, a Bedouin town of some 5,500 people two kilometers east of Rosh Pina. At around 2:30 A.M. on Monday morning, October 3, 2011 the Mosque was set on fire. The mosque’s interior was seriously damaged, and many holy books were destroyed by the blaze The whole mosque was burned: the carpet, the books, and the Korans.

In addition to the scorched interior, graffiti had been spray-painted on the exterior walls. The Hebrew words for price tag, revenge, and Palmer were the primary comments seen. Palmer is believed to be a reference to a September 23 incident in which Palestinians threw stones at a car driven by Asher Palmer, a recent settler. One of the stones may have hit him in the head, causing the car to crash and overturn. The 25-year-old Palmer and his year-old son both died in the accident.

This is an act which is against the values of the state of Israel, which places supreme importance on freedom of religion and freedom of worship.