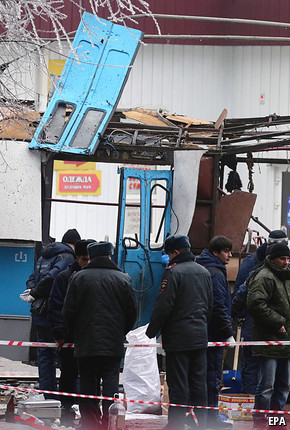 IT WAS always a question of when rather than if. Russia has been bracing itself for an attack since July, when Doku Umarov, the self-proclaimed emir of the northern Caucasus and a Chechen terrorist leader, pledged to disrupt the Sochi winter Olympics and lifted a moratorium on civilian targets in Russia that he had imposed in the wake of anti-government protests in December 2011. Yet, the audacity and the deadly choreography of the twin suicide bombings in the southern city of Volgograd on December 29th and 30th stunned the country.

The first bomb went off at a railway station, one of the most closely guarded places in the city; less than 24 hours later, the second ripped through a trolleybus in the morning rush-hour within a mile and a half of the first one. The death toll, so far, is 34 people, including two children. Another 50 people remain in hospital, some in critical condition. This was the third attack in Volgograd in three months. In October a female suicide bomber killed six people on a Moscow-bound bus.

The choice of Volgograd is not accidental. Once known as Stalingrad, it was a symbol of Soviet resistance during the second world war. But it is also an important transportation hub and 400 miles away from Sochi where Russia will host the winter Olympics in six weeks.

The attacks have brought back vivid memories of the apartment bombings in Moscow and other Russian cities in September 1999. The ensuing war in Chechnya, the second in five years, consolidated the country around Vladimir Putin, a former KGB officer who famously promised “to rub out [Chechen insurgents] in shithouses”. Mr Putin celebrated the new year of 2000, and the beginning of his rule, in a helicopter flying over Chechnya. Fourteen years later, he was again in the air flying to Volgograd to deal with the lingering consequences of that war.

‘Terror in Russia’ in Bible Codes by Rabbi Glazerson