Stabbing Attack In Tel Aviv In 5775 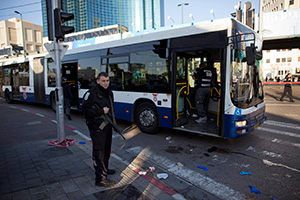 The assailant is named Hamza Mohammed Hasan Matrouk, a 23-year-old male from the West Bank city of Tul Karm who entered Israel illegally, was shot in the leg by an Israel Prison Service officer on Hamasger Street, near the scene of the incident. After being taken into custody, Matrouk was taken to the hospital for treatment and further police and Shin Bet questioning.

Palestinian sources say he does not belong to any group or organization.

The attack took place on Bus number 40 on Menachem Begin Road, a major thoroughfare in Tel Aviv, near the Ma’ariv Bridge. Three other people were moderately wounded, and five of the casualties were in light condition, according to Magen David Adom emergency services. A further five were suffering from shock.