The place where the Torah scroll was ripped is exactly the same pleace the code was found! Is this just coincidence?! To see it more clearly look at the illustrated table below!

As the terror event was unfolding in Mumbai the following table was discovered.

The( green) word that is found is the place BOMBAY as it was called for around 30 years before it was renamed MOMBAI. The red letters spell terror backwards. The dark grey letters(and one green letter above it) spell “in the house of chabbad”. Just above the green letter are two other letters in hebrew speliing Rav.

The sentence in the Torah which one can see starts in the letter ר in the words of the sentence “רב בית חבד” meaning ” Rabbi of the house of Chabad”.

The place in the Torah where it was found is the book “VAYiKRA”,portion ACHAREY,chapter 16,in the first verse which says “After the death of the two children of Ahron who were near G-D and died”. According to our Rabbis in the Medrash,it teaches us that the death of righteous people atones for the nation. 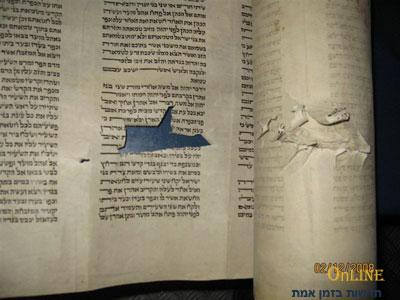