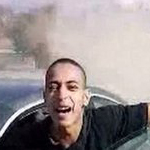 Mohammed Merah, the man believed to be the gunman on a scooter who killed seven people in south-western France, is a 23-year-old French citizen of Algerian extraction.

Before the shootings in Toulouse and Montauban, he was brought to French attention because of visits he made to Pakistan and Afghanistan.

He was also known to the French authorities because he had a criminal record for non-terrorist crimes.

Police surrounded him at a block of flats in Toulouse after the shootings, in which three French soldiers and a rabbi and three Jewish children were killed.

According to French prosecutors, he has expressed no regrets other than “not having claimed more victims” and is proud of having “brought France to its knees”.

Muahmad Mera The Terrorist in Bible Codes by Rabbi Glazerson