The Storm In United States 5775

An emergency has been declared in several US states as a storm bringing hurricane-force winds and 90cm (36ins) of snow barrels down on the north-east. 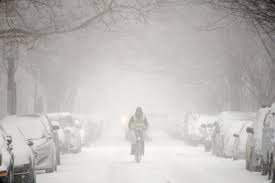 Boston, New York and Philadelphia began shutting down Monday evening as the flurries began, with the worst ahead.

Non-emergency vehicles have been banned on New York City’s 6,000 miles of roads after 23:00 local time.

“Recognise this as an emergency, this is not business as usual,” said Mayor Bill de Blasio.

New York, New Jersey, Connecticut, Rhode Island and Massachusetts have declared states of emergency and 50 million people are expected to wake up to a foot of snow on Tuesday.