Meteorite slams into Central Russia injuring 1100 – as it happened 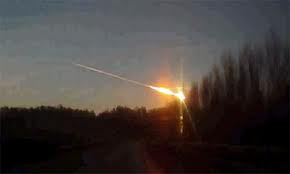 A meteor streaked across the sky above the Ural Mountains in Russia this morning, injuring more than 400 people, many hurt by broken glass, and causing explosions.

Fragments of the meteor fell in a thinly populated area of the Chelyabinsk region, the Russian Emergency Ministry said in a statement.

Reports conflicted on what exactly happened in the clear skies. A spokeswoman for the Emergency Ministry, Irina Rossius, told the Associated Press that there was a meteor shower, but another ministry spokeswoman, Elena Smirnikh, was quoted by the Interfax news agency as saying it was a single meteor.

Separately an asteroid called 2012 DA14 is due to make the closest recorded pass by the earth today.

‘The Astroid in 5773′ in Bible Codes by Rabbi Glazerson