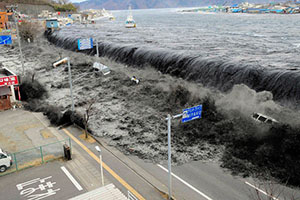 The 2011 earthquake off the Pacific coast of Tohoku, also known as the 2011 Tohoku earthquake, or the Great East Japan Earthquake, was a magnitude 9.0 (Mw) undersea megathrust earthquake off the coast of Japan that occurred at 14:46 JST (05:46 UTC) on Friday, 11 March 2011,with the epicenter approximately 70 kilometres (43 miles) east of the Oshika Peninsula of Tōhoku and the hypocenter at an underwater depth of approximately 32 km (20 miles).

It was the most powerful known earthquake ever to have hit Japan, and one of the five most powerful earthquakes in the world overall since modern record-keeping began in 1900.The earthquake triggered powerful tsunami waves, which reached heights of up to 40.5 metres (133 ft) in Miyako in Tōhoku’s Iwate Prefecture, and which in the Sendai area travelled up to 10 km (6 mi) inland.

In addition to loss of life and destruction of infrastructure, the tsunami caused a number of nuclear accidents, primarily the ongoing level 7 meltdowns at three reactors in the Fukushima I Nuclear Power Plant complex, and the associated evacuation zones affecting hundreds of thousands of residents.

Japanese Prime Minister Naoto Kan said, “In the 65 years after the end of World War II, this is the toughest and the most difficult crisis for Japan.” The Japanese National Police Agency confirmed 15,840 deaths, 5,950 injured and 3,642 people missing across eighteen prefectures, as well as over 125,000 buildings damaged or destroyed. 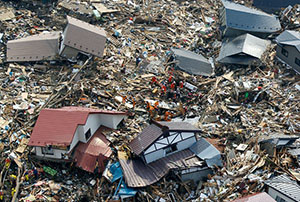 The earthquake and tsunami caused extensive and severe structural damage in Japan, including heavy damage to roads and railways as well as fires in many areas, and a dam collapse. Around 4.4 million households in northeastern Japan were left without electricity and 1.5 million without water.
Many electrical generators were taken down, and at least three nuclear reactors suffered explosions due to hydrogen gas that had built up within their outer containment buildings after cooling system failure.

Early estimates placed insured losses from the earthquake alone at US$14.5 to $34.6 billion. The Bank of Japan offered ¥15 trillion (US$183 billion) to the banking system on 14 March in an effort to normalize market conditions. The World Bank’s estimated economic cost was US$235 billion, making it the most expensive natural disaster on record. 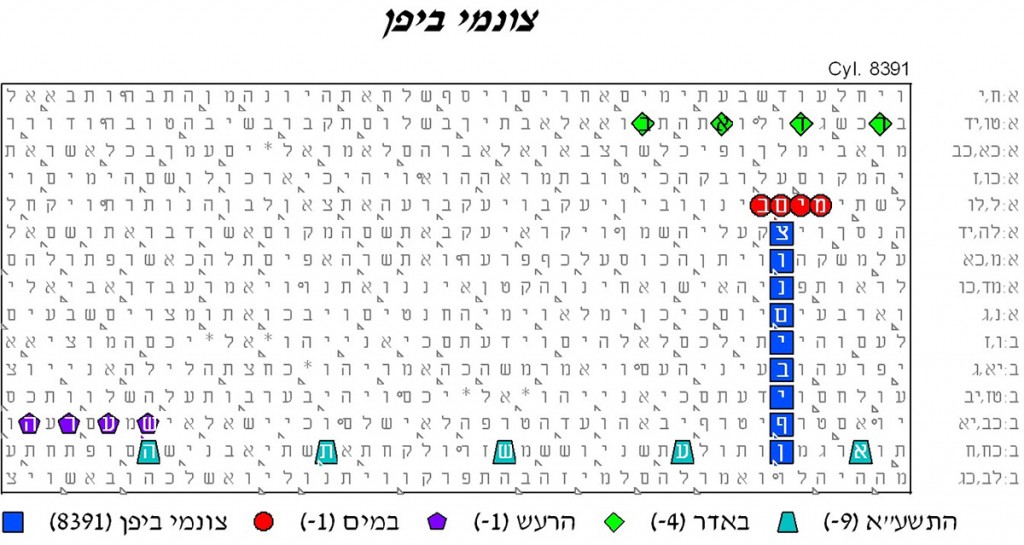 Translation for the table

במים IN THE WATER  MINIMAL IN THE TORAH