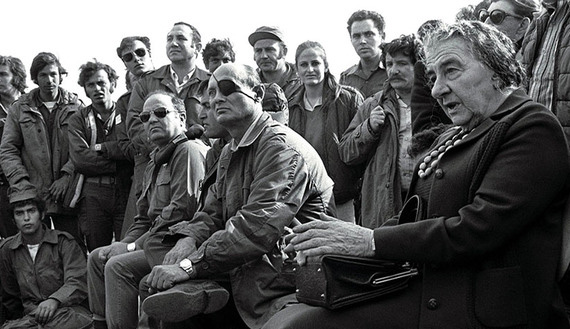 Minister Golda Meir (R) accompanied by her Defense Minister Moshe Dayan, meets with Israeli soldiers at a base on the Golan Heights after intense fighting during the 1973 Yom Kippur War. (photo by REUTERS)

“The Yom Kippur War was a lesson that we should learn every day and every hour, to understand that every one of us could make a mistake in understanding reality. Therefore, it is our responsibility to make sure arrogance, complacency and intellectual tyranny do not take over,” said Defense Minister Moshe Ya’alon at this year’s official memorial ceremony held Oct. 5 on Mount Herzl, commemorating the fallen of the 1973 Yom Kippur War. It was a deceptive statement, intended to give the impression that the country’s leadership is acting out of insightfulness and humility.