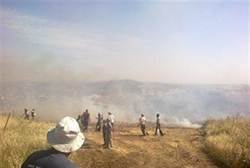 Arabs set fire to fields outside the Samaria (Shomron) community of Yitzhar on Saturday. Fire crews that arrived at the spot were pelted with rocks. One of the Arabs pulled out a knife and was shot in the stomach by a member of Yitzhar’s emergency readiness squad.

Arabs and the pro-Arab group B’tselem claim that the Arabs were in fact trying to put out the fires, which had been set by Jews from Yitzhar. The Arabs insist that this is what happened, even though Jews are forbidden to light fires on Sabbath.

Samaria Regional Authority Head Gershon Mesika said Sunday night that “the extreme leftists do not document events but rather paint them. These are professional libelers and inciters, whom the public denounces and despises. I wish to offer encouragement to the members of Yitzhar’s emergency readiness squad, who were alerted to put out a fire a few meters from the community’s homes, and found themselves in a pre-arranged ambush by terrorists armed with rocks and cameras from B’tselem.”

Mesika said that B’tselem’s video edited out the scene in which the terrorist pulled out his knife, showing only the Yitzhar squad’s response. He demanded that the IDF issue administrative orders distancing extreme leftist activists from Judea and Samaria.

The Organization Beselem in Bible Codes by Rabbi Glazerson