The Massacre in Syria 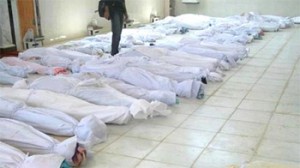 Survivors of the massacre in Syria’s Houla region have told the BBC of their shock and fear as regime forces entered their homes and killed their families.

Several witnesses said they hid or played dead to survive.

Most claimed that the army and the feared shabiha militia carried out the atrocities, though the regime insisted “armed terrorists” were to blame.

UN-Arab League envoy Kofi Annan has arrived in Damascus for talks on implementing his peace plan.

The Massacre in Syria in Bible Codes by Rabbi Glazerson