Home » Middle East » The Iranian Threat in the Straits of Hormuz

The Iranian Threat in the Straits of Hormuz 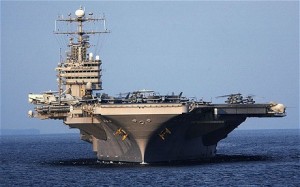 A senior member of Iran’s parliament said on Monday the Islamic Republic would close the entry point to the Gulf if new sanctions block its oil exports, reiterating a threat made by officials a month ago that caused a temporary oil price spike.

“If any disruption happens regarding the sale of Iranian oil, the Strait of Hormuz will definitely be closed,” Mohammad Kossari, deputy head of parliament’s foreign affairs and national security committee, told the semi-official Fars news agency.

The threat came after European Union nations agreed on an oil embargo against Iran as part of sanctions over its nuclear programme.

Diplomats in Brussels said the EU foreign ministers would officially adopt the measures later on Monday that were hashed out by the 27 ambassadors.

The measures include an immediate embargo on new contracts for crude oil and petroleum products while existing ones are allowed to run until July.