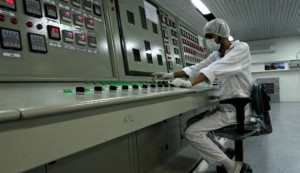 Diplomats say the IAEA has found traces of uranium enriched up to 27 percent at Iran’s Fordo enrichment plant.

The UN atomic agency has found evidence at an underground bunker in Iran that could mean the country has moved closer to producing the uranium threshold needed to arm nuclear missiles, diplomats said Friday.

The International Atomic Energy Agency has found traces of uranium enriched up to 27 percent at Iran’s Fordo enrichment plant, the diplomats told The Associated Press.

That is still substantially below the 90-percent level needed to make the fissile core of nuclear arms. But it is above Iran’s highest-known enrichment grade, which is close to 20 percent, and which already can be turned into weapons-grade material much more quickly than the Islamic Republic’s main stockpile, which can only be used for fuel at around 3.5 percent.