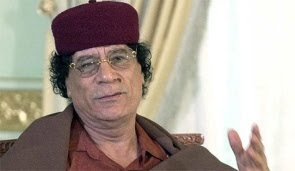 You won’t believe this… Gadhafi’s mother was Jewish

During a discussion on Israel Radio they just dropped this little tidbit. There is a Jew left in Libya. His name is Muammar Gadhafi. At first, I found it hard to believe, but when I Googled “Gadhafi’s mother was Jewish” (without the quotes), the first three results all confirmed it.

Bashar Asad of Syria the cruel
Netanyahu Speech in the U.N.
End of Atom in Iran - Repentance
Israel will Attack in Iran - Warning