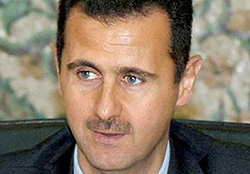 As the White House appeared poised to send military aid to Syrian rebels, new concerns arose that the weapons will inevitably fall into the hands of terrorist groups who count themselves among hundreds of factions that form the rag-tag Free Syrian Army.

President Obama, seeking to stem a bloody civil war that has now claimed more than 92,000 lives, has authorized food and medicine for the rebels seeking to oust President Bashar Assad, but had stopped short of military aid. But with U.S. officials confirming Assad’s use of chemical weapons against civilians – crossing Obama’s “red line” – the White House strongly indicated that weapons are on the way.

“The president has made the decision to authorize additional assistance, but we’re not going into specifics,” National Security Council spokeswoman Bernadette Meehan told FoxNews.com Friday. “The president has been very clear that all options are on the table, with the exception of U.S. troops on the ground. That is not a possibility.”

Initial military aid is expected to consist of small arms and ammunition. That could include a range of weapons, including small arms, assault rifles, shoulder-fired rocket-propelled grenades and other anti-tank missiles which the opposition forces could operate without significant training. But the rebel Free Syrian Army, which now gets light arms from Saudi Arabia and Qatar, said on Friday more light weaponry from the U.S. would be largely “meaningless.” The Syrian Opposition Coalition called for “strategic and decisive” support.