Description of attack in which six rebels died adds to uncertainty about claims that sarin has been used in the conflict. 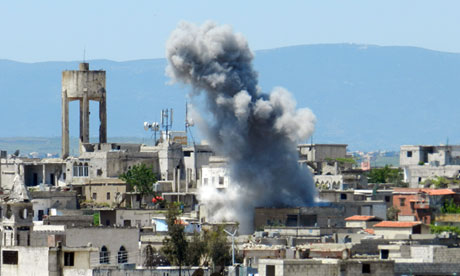 New questions have emerged over the source of the soil and other samples from Syria which, it is claimed, have tested positive for the nerve agent sarin, amid apparent inconsistencies between eyewitness accounts describing one of the attacks and textbook descriptions of the weapon.

As questions from arms control experts grow over evidence that the Assad regime has used chemical weapons on a limited scale on several occasions, one incident in particular has come under scrutiny.

While the French, UK and US governments have tried to avoid saying where the positive sarin samples came from, comments by officials have narrowed down the locations to Aleppo and Homs.

Last week the Obama administration suggested that Syrian government forces may have used the lethal nerve gas in two attacks. Opposition fighters have accused regime forces of firing chemical agents on at least four occasions since December, killing 31 people in the worst of the attacks.

A letter from the British government to the UN demanding an investigation said that it had seen “limited but persuasive evidence” of chemical attacks, citing incidents on 19 and 23 March in Aleppo and Damascus and an attack in Homs in December, suggesting strongly that samples were taken at these locations.

A US defence official, who spoke on condition of anonymity to the Los Angeles Times, appeared to confirm that one of the samples studied by the US was collected in December – suggesting that it too originated in Homs.

According the US Centres for Disease Control and Prevention, “sarin is a nerve agent that is one of the most toxic of the known chemical warfare agents. It is a clear colourless liquid … generally odourless and tasteless”.