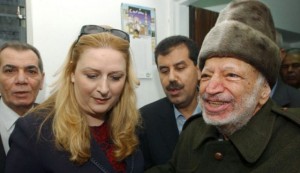 AFP reported that the prosecutor’s office in the town of Nanterre west of Paris had ordered a murder investigation following a formal complaint by Arafat’s widow, Suha Arafat. The probe will be carried out by one or more investigating magistrate, who will have the power to summon witnesses.

Suha Arafat filed a complaint for murder against persons unknown last month following the revelation by a Swiss laboratory that it had found traces of highly radioactive polonium on Arafat’s underwear.

Arafat died on November 11, 2004 at Percy military hospital near Paris.

Allegations of foul play have long surrounded Arafat’s demise in November 2004 after French doctors who treated him in his final days said they could not establish the cause of death.

The controversy was reignited by an Al Jazeera expose in which the Swiss Radiophysics Institute said it found “surprisingly” high levels of polonium-210 on Arafat’s clothing – the same substance used to kill former Russian spy Alexander Litvinenko in London in 2006.

The Swiss institute said, however, that the symptoms described in the Palestinian president’s medical reports were not consistent with the radioactive agent.

“Madame Arafat hopes that the authorities will be able to establish the exact circumstances of her husband’s death and uncover the truth, so that justice can be done,” lawyer Pierre-Olivier Sud said in a statement.

Arafat Death in Israel in Bible Codes by Rabbi Glazerson