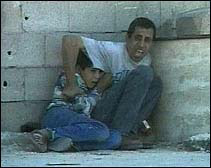 IDF fire did not kill or injure 12-year-old Gazan Muhammad al-Dura – a Palestinian icon of the second intifada – or his father Jamal in 2000, an Israeli committee tasked with reviewing the incident said on Sunday.

The findings were presented to Prime Minister Binyamin Netanyahu in a 36-page report.

Al-Dura was allegedly killed by IDF fire during the second intifada as he crouched behind his father, crying, according to a report on French television station France 2. He became one of the most potent symbols of the second intifada for Palestinians, and footage of him cringing in fear and of his alleged death was broadcast repeatedly across the globe.

Charles Enderlin, the journalist who was the source for the original al-Dura report, rejected the government’s report and expressed frustration, telling The Jerusalem Post that the investigators never made contact with him.

Enderlin added that he, his cameraman who filmed the incident and Dura’s father Jamal, were all willing to take polygraph tests.
Read more…