Home » Judaism and Kabbalah » The Movie Innocence of the Muslims

The Movie Innocence of the Muslims 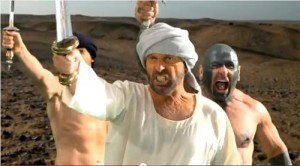 Google had rejected a request from the White House to remove the film, but has already blocked access to it in Libya, Egypt, Indonesia and India.

It said it would consider blocks in other nations where the film is illegal.

In an official statement, King Abdullah said the website would be blocked if Google did not agree to remove links to the controversial film.

The country’s Communications and Information Technology Commission also called on Saudi citizens and expats to report any links they found to the “defaming” film.

“This is considered a duty imposed by our true religion on every Muslim, necessitating the prevention of any blaspheming reports to our Prophet (peace be upon him) and to our true religion,” said a statement released via the state press agency SPA.

What Delays Mashiach ?
Jesus
The Million's Assembly in Jerusalem
Days are coming