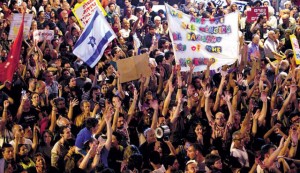 Social justice lies at the heart of the Jewish people

We don’t know whether Bilaam, the gentile prophet prophesied the protest tents of the Israeli social justice movement, but other prophets certainly identified with the spirit of the struggle. Most famously, Amos, the prophet from Tekoa resolutely insisted that social justice lies at the heart of Judaism.

Currently, the gap between the rich and the poor in Israel is one of the widest in the developed world. The protestors object to this, and the ancient prophet shared their concerns. He railed against a society which taxed the poor beyond measure, while the rich lived in decadent luxury. This, he states is intolerable and unsustainable:

His warning remains potent. Israel will only maintain law and order and persuade our young people to sacrifice years of their lives serving in the army if they feel that society treats them fairly. They need to know that their political and religious leaders are looking out for their needs.