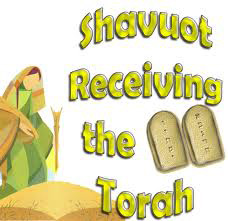 The Torah was given by G‑d to the Jewish people on Mount Sinai more than 3300 years ago. Every year on the holiday of Shavuot we renew our acceptance of G‑d’s gift, and G‑d “re-gives” the Torah.

The word Shavuot means “weeks.” It marks the completion of the seven-week counting period between Passover and Shavuot.

The giving of the Torah was a far-reaching spiritual event—one that touched the essence of the Jewish soul for all times. Our sages have compared it to a wedding between G‑d and the Jewish people. Shavuot also means “oaths,” for on this day G‑d swore eternal devotion to us, and we in turn pledged everlasting loyalty to Him.

In ancient times, two wheat loaves would be offered in Holy Temple. It was also at this time that people would begin to bring bikkurim, their first and choicest fruits, to thank G‑d for Israel’s bounty.
On this day G‑d swore eternal devotion to us, and we pledged everlasting loyalty to Him

‘Shavout – Acceptance of Torah’ in Bible Codes by Rabbi Glazerson