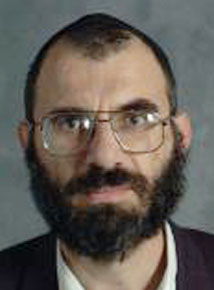 Daniel Michelson was born in Riga, Latvia, in 1949 to parents who survived the Holocaust. In 1971 he graduated in Mathematics from Moscow University and emigrated to Israel. From 1972-1980 he taught Mathematics at Tel Aviv University, studied toward a doctorate and served in the army. Upon completing his PhD thesis in Applied Mathematics in 1980, he did postdoctoral research at the University of California at Los Angeles. In 1983 he was awarded fellowships from the Alfred P. Sloan Foundation and from the Igal Alon Foundation.

In the fall of 1983 Michelson returned to Israel and started to teach at the Hebrew University. There he learned about the codes in the Torah from his colleague and friend Dr. Eli Rips. This led him eventually, he says, “to do t’shuva”.

Later he became involved in researching the Torah codes and lecturing about them (particularly in Los Angeles and Berkeley, California). Currently, Michelson is an Associate Professor of Mathematics at UCLA and at the Hebrew University. He lives now in Har Nof, Jerusalem, with his wife and three sons.