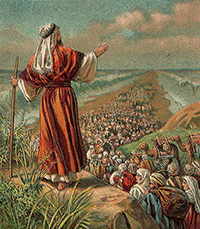 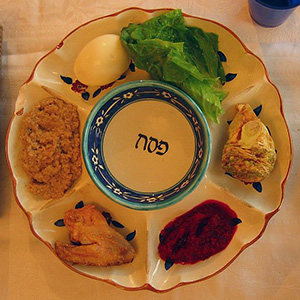 Pesach is a Jewish holiday and festival. It commemorates the story of the Exodus, in which the ancient Israelites were freed from slavery in Egypt. Passover begins on the 15th day of the month of Nisan in the Jewish calendar, which is in spring in the Northern Hemisphere, and is celebrated for seven or eight days. It is one of the most widely observed Jewish holidays.

In the narrative of the Exodus, the Bible tells that God helped the Children of Israel escape slavery in Egypt by inflicting ten plagues upon the Egyptians before the Pharaoh would release his Israelite slaves; the tenth and worst of the plagues was the slaughter of the first-born.

The Israelites were instructed to mark the doorposts of their homes with the blood of a spring lamb and, upon seeing this, the spirit of the Lord passed over these homes, an easy way to remember the holiday. There is some debate over where the term is actually derived from. When the Pharaoh freed the Israelites, it is said that they left in such a hurry that they could not wait for bread dough to rise (leaven).

In commemoration, for the duration of Passover no leavened bread is eaten, for which reason it is called “The Festival of the Unleavened Bread”. Matzo (flat unleavened bread) is a symbol of the holiday.

Together with Shavuot (“Pentecost”) and Sukkot (“Tabernacles”), Passover is one of the three pilgrimage festivals (Shlosha Regalim) during which the entire Jewish populace historically made a pilgrimage to the Temple in Jerusalem. Samaritans still make this pilgrimage to Mount Gerizim, but only men participate in public worship.