Home » Israel » The Threat of Early Elections in Israel

The Threat of Early Elections in Israel 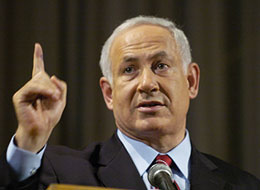 General elections could be held as early as August, according to political sources. The time slot being considered ranges from the end of August to the beginning of November, which is when the United States will be electing its next president.

Prime Minister Benjamin Netanyahu threw some more oil on the fire Sunday by saying the issue of early elections “would be clarified soon.”

At the start of a Likud ministers’ meeting, Netanyahu added: “There’s an assumption that we’re going to early elections, but there are no conclusions yet.” According to him, the opposition factions are competing with one another in broadcasting how they are itching for elections even though this is not the case.

Political sources estimate that Netanyahu would prefer elections to be before the three-week fall holidays (which begins with Rosh Hashanah on September 17, and ends with Simhat Torah on October 8 ) or even as early as late August.

Elections in Israel in 5772 in Bible Codes by Rabbi Glazerson