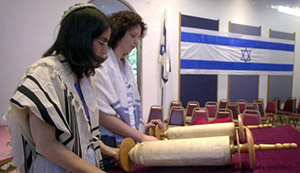 For first time, Israel to recognize Reform and Conservative rabbis

In an unprecedented move, Israel has announced that it is prepared to recognize Reform and Conservative community leaders as rabbis and fund their salaries.

Rabbis belonging to either stream will be classified as “rabbis of non-Orthodox communities.” The attorney general advised the High Court that the state will begin equally financing non-Orthodox rabbis in regional councils and farming communities that are interested in doing so.

The state’s answer comes in response to a petition that was made in 2005 by the Israel Movement for Reform and Progressive Judaism, in the name of the Reform community at Kibbutz Gezer and Rabbi Miri Gold, who demanded equal financing of non-Orthodox religious services to those of the Orthodox via the municipal authority. The petitioners demanded the regional council be allowed to finance the salary of the community leader in the same way that hundreds of regional councils, neighborhoods and communities across the country do so for male Orthodox rabbis they employ.

The Reform in Bible Codes by Rabbi Glazerson