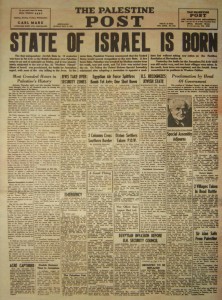 The Israeli Declaration of Independence (Hebrew: הכרזת העצמאות‎, Hakhrazat HaAtzma’ut or Hebrew: מגילת העצמאות‎ Megilat HaAtzma’ut), was made on 14 May 1948 (5 Iyar 5708), the day before the British Mandate was due to expire. David Ben-Gurion, the Executive Head of the World Zionist Organization and the chairman of the Jewish Agency for Palestine,declared the establishment of a Jewish state in Eretz-Israel, to be known as the State of Israel.

The event is celebrated annually in Israel with a national holiday called Yom Ha’atzmaut (Hebrew: יום העצמאות‎, lit. Independence Day) on 5 Iyar of every year according to the Hebrew calendar.

The Independent Day of Israel in Bible Codes by Rabbi Glazerson