Release of Bloody Terrorists in Israel 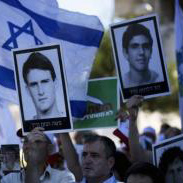 JERUSALEM — The government Sunday approved the contentious release of long-serving Palestinian and Israeli Arab prisoners, reportedly including some with Israeli blood on their hands, to coincide with renewed peace talks, public radio said.

It said the 22-member cabinet approved Prime Minister Benjamin Netanyahu’s proposal to free prisoners by a vote of 13 in favour, seven against and two abstentions.

In an open letter published on his official Facebook site Saturday, Netanyahu said he had agreed “to free 104 Palestinians in stages, after the start of negotiations and according to progress” and that he would seek cabinet endorsement.

His office said in a statement on Sunday that the cabinet also approved peace talks with the Palestinians brokered by the United States but without elaborating where or when.

The statement, however, did not announce that a prisoner release had been approved, only mentioning the formation of a committee on the issue.

“The government approved the opening of negotiations between Israel and the Palestinians… and mandated a ministerial committee for the release of prisoners during the course of the talks,” it said.